Continuing the new series where I cover aspects of the industry over the weekend, in this post I will
be covering the life cycle of products in the pharmaceutical industry.

Pharmaceutical life cycle management is the process of managing the entire life cycle of a drug including its research, design and manufacture, service and disposal. Companies utilise it to maximize sales throughout their products life cycle and it provides an extra competitive edge, increasing profits.

Its critical that companies have an efficient product life cycle management due to the significant capital and resources injected into R&D and regulatory approval subsequent profits would take years to produce. And with a relatively small period in which companies can sell without generic competition, it is essential that companies can maximize their products lifetime value.

Drugs life cycle can be split into three stages, an extensive early development period, a highly competitive mid-life period and a significant late post-patent period. Unlike most products, drugs have a lengthy closely regulated and complex developmental pre-marketing phase usually lasting a decade or longer.

The first and most lengthy stage is the development stage and regulatory approval. It is the most expensive out of the three with drug discovery, identification of candidate, non-clinical testing on animals and safety and efficacy tests performed first to identify and make a product that can be used on the human population. Once the pre-clinical tests have been fulfilled it will go onto the clinical trials which are split into three phases.

Phase 1, tests on a group of healthy volunteers (20-100) where small doses of the product will be administered where they are closely supervised, this stage can approximately last for several months and its purpose is to investigate safety and dosage.

Phase 2, tests approximately 50-100 patients with the disease and lasts from several months to two years. The purpose of stage two is to investigate the efficacy of the drug and its potential side effects. Most drugs fail at this stage showing detrimental side effects and only 33% of drugs past on to the final stage.

The final phase trial tests a much larger population of patients, often 1000-5000 across international sites. The purpose of this stage is to confirm the phase two trial results but on a much larger scale.
After the pre and clinical trials, all the data accumulated needs to be submitted in appropriate forms to the regulatory authorities along with quality of the data and the description of the manufacturing process for review. The drug is only approved if regulators can find proof from the data of its quality, efficacy and safety.

Preclinical development can take between one and six years, while the clinical development stage can take between just over 6 months and two years. This shows how lengthy and costly this stage is and it is without guaranteed success thus further highlighting the need to maximize the drugs life cycle while it still has a patent. Pharma companies have been looking into reducing the development stage to reduce development costs and to increase the period of market exclusivity that the drug enjoys. Companies have been looking into this by utilising new technology such as 3d imaging and AI, with the latter being able to sift through vast amounts of data to identify target molecules, shortening down the process from years to a few months.

The next stage in the life cycle is the market-exclusivity stage, this stage is designed to increase innovation and investment in the industry by protecting new products from competition. A patent can be filed at any time during the development stage, which means that if a drug has a very length development process, it is possible that it could reach the market with a very limited amount of patent protection remaining. To create a balance between innovation and greater access to drugs, the FDA awarded an extra 5 years of exclusivity following a successful new chemical entity application. In this phase, this is where companies attempt to recoup development costs and generate profit. It can be split into three smaller stages of 1) Introduction 2) Growth and maturity and 3) Decline 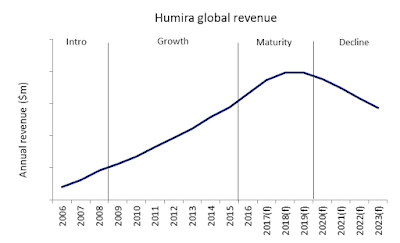 1)    Introduction- is the phase that covers product launch, distribution arrangements are introduced and there is typically large expenditure spent on promotion and advertising.
2)Growth and Maturity- This the successful phase in the life cycle and the perfect opportunity for companies too focus on increasing market share. In this stage, product availability and services are improved. In the maturity phase, this is when variations of the main product saturate the market. This phase is the perfect time to increase the products life span, which is achieved by changes in pricing and discount policies. As well as the scope of promotion altering from getting new customers to product differentiation in terms of quality and reliability.

3)Decline phase- Is the time variations of the product that are weak are withdrawn from the market but prices of the main product are still competitive and promotion is only withdrawn to a level that will keep the products presence visible.

The final stage of the life cycle is post patent expiration. Companies in this period rather than trying to compete against the generics they try to extend the patent. There are several strategies which companies implement including claiming delays occurred during the initial application process both with the patent office and FDA or applying for a new formulation patent.

Product Life Cycle Management is extremely important for companies to implement and with its relevance becoming ever increasingly important due to a serious decline in research and development productivity, companies need to be able to maximize the efficiency their products.