Takeda on route to paying of Shire acquisition debt

Takeda pharmaceuticals has been raising cash and cutting costs in order to pay of the debt it accumulated in acquiring Shire pharmaceuticals. CFO, Costa Saroukos stated during a conference this week that Takeda’s cost-saving plan was ‘well on track.’ This is shown by its action in May, where it dialed up its annual cost-savings target to $2billion from $1.4billion, by the end of 2021. 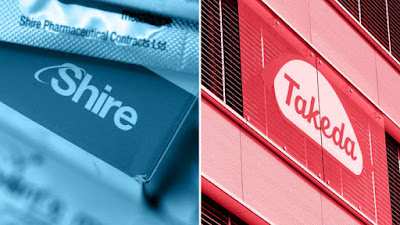 When the acquisition was announced, there was a huge uproar from shareholders, who were worried about the huge debt that Takeda would accumulate. Takeda announced at the time that it planned to sell as much as $10billion of its assets, outside of its key areas of gastrointestinal disorders, rare disorders and plasma-derived therapies. By the end of June this year, Takeda has managed to reduce its debt-to-earnings ratio to 4:4 from the 4:7 from the end of March. And this was before it sold who
Shire’s Xiidra eye drug to Novartis for $3.4bn, which was collected on the 1st of July.

A large proportion of the savings stems from job cuts, with Takeda planning on cutting 6-7% of the combined Takeda-Shire workforce, amounting to around 3,600 employers. Takeda has also been in communication with vendors, in order to save on costs, with Takeda gathering 40 of its largest suppliers for a summit in June. At that gathering, it gained around $200m of extra cash flow by extending payment terms and managed to save $200m worth of potential cost reductions.

Amid this good news, that is not to say that Takeda will not face challenges this coming year. With several of Takeda’s products set to face generic competition particularly in the US market. With gout drug, Uloric, seeing sales fall by 13% to 12.2 billion yen, as two of three approved generics entered the market.
at August 03, 2019